Starting with Æthelstan, said to be the first King of England, I have started an AI art project that involves using Stable Diffusion through Night Cafe Studio to generate portraits of all English monarchs. That is those rulers presiding over the nation of England before the act of union with Scotland.

Stable Diffusion is a DALL-E style text to image generation artificial intelligence model that has been released under a Creative ML licence that allows for commercial and non-commercial use.

This new model is particularly good at pop-culture and realistic faces, something that earlier generation models were not capable of in any meaningful way, particularly faces which would come up distorted.

“This release is the culmination of many hours of collective effort to create a single file that compresses the visual information of humanity into a few gigabytes,” project authors from Stability.ai wrote.

I enjoy working with NightCafe Studio for its relatively simple interface, low credit price and choice of models. It also has a strong in-service community of AI artists that comment on one another’s work.

I started the project with the Wikipedia list of English monarchs, which has each of them in order and grouped by House. It starts with Æthelstan and runs through a new house each month. The first is the original rule of the House of Wessex starting in 927 CE. 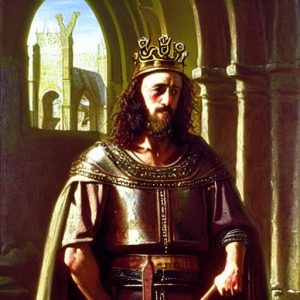 Æthelstan was King of the Anglo-Saxons from 924 to 927 after being accepted by the Mercians as king. He later also became king of Wessex and in 927 conquered the final Viking kingdom of York, making him the first Anglo-Saxon ruler of the whole of England, serving until his death in 939 aged 45.

Æthelstan centralised government and increased control over the production of charters, as well as summoning leading figures from distant areas of the country to sit in his council.

Creation: To generate images related to Æthelstan I entered his name ‘Æthelstan’ and ‘King of England’ with a setting to focus the style of image on oil paintings. It was set to use the stable diffusion model, had it generate nine images and do so as a long-run thumbnail. 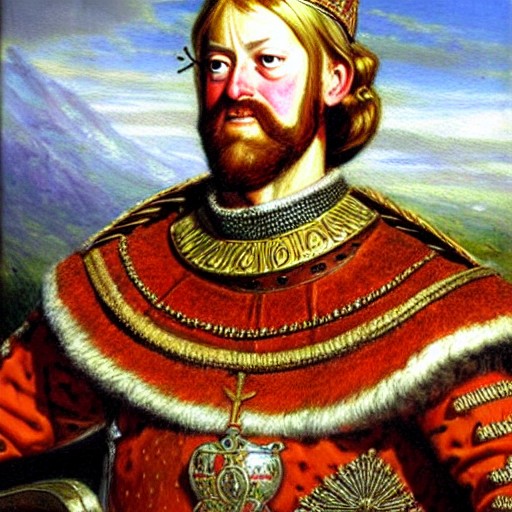 Edmund took the throne after the death of his half-brother of Æthelstan who died with no wife or children. Edmund was killed in a brawl at Pucklechurch in Gloucestershire, and as his children were still infants at the time of his death was succeeded by his younger brother Eadred.

He had a rocky start to his rule and wasn’t fully King of England for all of his short reign. After Æthelstan’s death Viking Anlaf Guthfrithson was accepted as king of York and extended Viking rule to the Five Boroughs of north-east Mercia, taking large parts of England out of Edmund’s control.

Edmund was eventually able to recover his position following Anlaf’s death in 941 and took back control of the Five Boroughs a year later. By 944 he regained control of the whole of England when he expelled the final Viking kings of York, although it wasn’t a stable time.

Creation: Generated using Stable Diffusion with a thumbnail size selection of four images. Was a long-run generation time and came from the term ‘Edmund 1 King of England’.

This site uses Akismet to reduce spam. Learn how your comment data is processed.